Apex, and the Rebel Nightclub Sound and Light Experience

The following text is extracted from an original article (click here) titled "A Reloaded Toronto Nightlife Staple" written by Kevin Young for Professional Lighting and Production magazine.  Kevin is a Toronto-based musician and freelance writer. 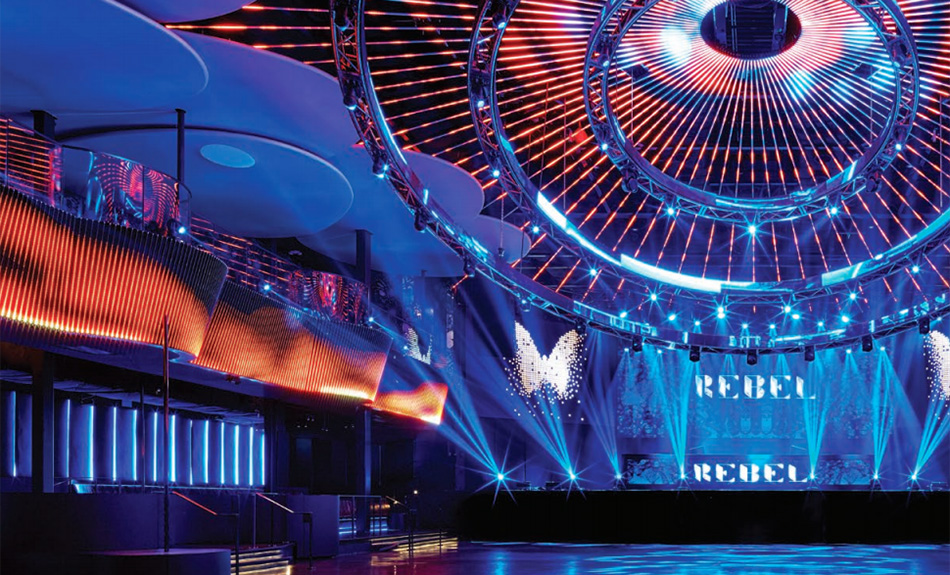 Polson Pier, formerly known as The Docks, has been a Toronto entertainment hotspot for years.  One of the key contributors to that status was Sound Academy, a 3,200-capacity concert hall and night - club that regularly brought international touring acts to the waterfront complex.

And while Sound Academy was becoming an iconic Toronto venue on the back of its programming, it had earned a reputation within insider circles for its less-than-ideal acoustics and providing an experience that, while faithful to similar cavernous rock clubs, was far from extraordinary.  Well, that’s all changed now ...

Since inception in 1982, Toronto-based INK Entertainment has become one of Canada’s leading lifestyle and entertainment companies.  INK’s properties include restaurant brands such as Byblos and Weslodge, major music events like VELD –Toronto’s largest music festival – and several wellknown nightclubs in and around the city’s downtown core.

Founded and led by Charles Khabouth, who has consistently been named one of the “most influential Torontonians” by the city’s bastion of taste, Toronto Life magazine, INK Entertainment’s offerings routinely push the envelope in terms of offering its patrons a truly unique experience.  Fortunately for late-night fun seekers throughout the GTA, REBEL Nightclub is no exception.

The message to anyone who might feel a bit reluctant to drag their asses off of the couch, or leave the comfort of the familiar scene in the Entertainment District: Go east.  Now.  (Or, you know, next Saturday.)

The latest iteration of what was formerly Sound Academy, the revamped and reloaded REBEL Entertainment Complex is truly an upgrade that has to be experienced to be believed.

At the outset of the overhaul, INK tapped Pickering, Ontario based production technologies provider Apex Sound & Light for the design and installation of the audio, lighting, and visual systems inhabiting REBEL, owing to a longstanding and successful relationship between the two firms.

“I’ve been working with Apex for 20 years, and for this particular venue, I challenged them to develop a unique and adaptable lighting and video system that would work for corporate events, concerts, and club nights without having to bring in additional equipment to support the different styles of events,” Khabouth says.

What they delivered is that and a lot more.

Apex was engaged for the project about two years ago, following the announcement that one of INK’s other properties, The Guvernment, had been sold and the site repurposed for condomini - um development.  Subsequently, INK acquired the Sound Academy and set out to replicate the capabilities of The Guvernment/Kool Haus in one room, while bringing the overall experience into a new era with lavish appointments and state-ofthe-art technologies.

“Charles’ idea was to make sure the venue was over the top – that the attraction was the venue itself,” says Themmy Papas, Apex VP and the designer of the lighting and video systems now inhabiting REBEL.

Papas also worked on the AV system for Cabana Pool Bar, a luxury day club on the Polson Pier site offering multiple services similar to a Vegas-style resort, and the ultra-lavish Noir lounge within REBEL proper; however, it was clear in the initial mandate that the crown jewel of the Polson Pier complex would be REBEL.

The new design, says Apex President Graham Northam, required a complete reimagining of the facility and its systems.  The result is a venue with proper acoustic considerations, a completely revamped sound system largely based on premium d&b audiotechnik products, and boasting a custom lighting and visuals system designed to awe patrons and serve in any application for which the club is – and will be – used.

Additionally, the venue features an elevated 135-foot private deck overlooking Lake Ontario and the Toronto skyline from the eastern water - front, four full-service bars, and upscale bottle service.  “You just can’t beat the views,” Northam says as a side note.

The club itself operates one night a week, on Saturdays, leaving it available for other live and special events the remainder of the week.

To see the lighting and video system at full throttle, delivering a truly one-of-a-kind spectacle, Saturday is the best night to go.

“I’ve had suppliers in town and arranged for them to go [to REBEL].  They said, ‘Sure, we’ll check it out and have a drink,’” Northam shares.  The next day, though, he’d hear they didn’t leave the venue until the wee hours because of the almost hypnotic environment and, more specifically, the light show.

“They had such a good time they didn’t realize they were there until 3 o’clock in the morning,” he says with a chuckle – and that’s professionals who regularly work with entertainment technologies.

Beyond lighting, beyond audio, beyond décor, REBEL features what could be described as an immersive, interactive experience incorpo - rating live dancers and entertainment as well as stunning visuals.

As for the fixtures loaded onto each, there are 52 Elation ACL360i moving lights in total secured onto the rings.  The rings also feature some 800 4- mm LED video panels lining both their inner and outer surfaces, all of which are controlled by one Madrix Ultimate control dedicated specifically to the rings’ video elements.

Shooting through and around the truss are several C02 (smoke) elements as well as 24 Elation colour pendants suspended over the rings.  While static, they can be used to provide pure white, multiple colours, and strobing during the nighttime hours and, additionally, as long-term, long-lived work lights.

Within the rings are a number of “spokes” – like those of a bicycle wheel – comprised of 126, 8-m long SPI RGB LED lighting tracks controlled via the Madrix Ultimate controller.  One way to describe them in terms of function is that they are similar to Barco’s now-retired Versa Tubes, but far sleeker.  And while they definitely add to the wow factor, it’s the video elements that put the space over the top.

“When you’re looking at a still picture, [the spokes] show up very well, but honestly, the biggest and best element is the bulkheads and the 4-mm LED panels on the rings – it’s so high res,” Papas notes about the visuals.

The under-balcony bulkhead is lined with 1.5-m long SPI RGB LED lighting tracks, again controlled by Madrix.  “They are curved on two separate axes, 980 of them placed about an inch apart and, in all, 240 feet long,” Papas explains.

While hardly a technical term, the best way to describe the shape of these elements is “wavy” – conforming to the footprint of the balcony itself and floating in a way that surrounds the main dance floor.

On top of the bulkheads, there are also 16 ADJ Vizi Beam RXONE compact moving heads deployed.

Some of the content displayed on the venue’s video walls is generated from stock library elements within the proprietary programs associated with the gear, but most of the video content the club uses is either custom created internally at INK or by Montreal-based production company Black Mohawk.

“A lot of bands are touring with their own stuff and will take those down and use their own gear,” Papas puts in about when touring productions take over the venue, “but I’d say that most bands are actually using what’s in house.”

Control of the system is handled via DMX through one MA Lighting grandMA console, which triggers the Madrix sub controllers and the aforementioned Christie Spyder X20.

About the Spyder X20, Papas says: “It’s a very sophisticated processor that shapes the video images so it can scale and crop, switch, and do anything you can possibly think of with eight ins and eight outs.”

Finally, the venue required a large amount of accent lighting, much of which is achieved using several thousand feet of Rosco LED tape for banquettes, bars, and the edges of bar shelving.

According to INK’s website, multimedia production for the venue was led by Adam Hummel, who boasts a pretty impressive resume when it come to art direction and motion design.  Among the major projects in which he’s had a hand are Beyoncé’s Formation world tour, Imagine Dragons’ 2015 world tour, and Madonna’s 2012 world tour.

Beyond that, the elaborate spectacles at REBEL incorporate: the work of choreographer Nico Archambault, 2008 winner of So You Think You Can Dance Canada and once a dancer for Janet Jackson, costume design by Black Mohawk CEO Jessica Roy, and creative direction by Black Mohawk director Jack Kalachian.

As for the custom technical element of the club’s systems, Papas says: “Nothing was off the shelf – everything was custom built, all the way down to the power supply and the PC boards that hold the LED strips and the extruded aluminum the bulkheads are mounted on.”

Together, they all come together to provide a stunning look – even when the system is off.  “We worked closely with the owner and the interior designer to make sure that what we were putting in worked for everybody’s plans and wishes,” Papas adds in summary.  “It was definitely a group effort, and resulted in something you won’t see anywhere else.”